Researched and written by Tim Anderson 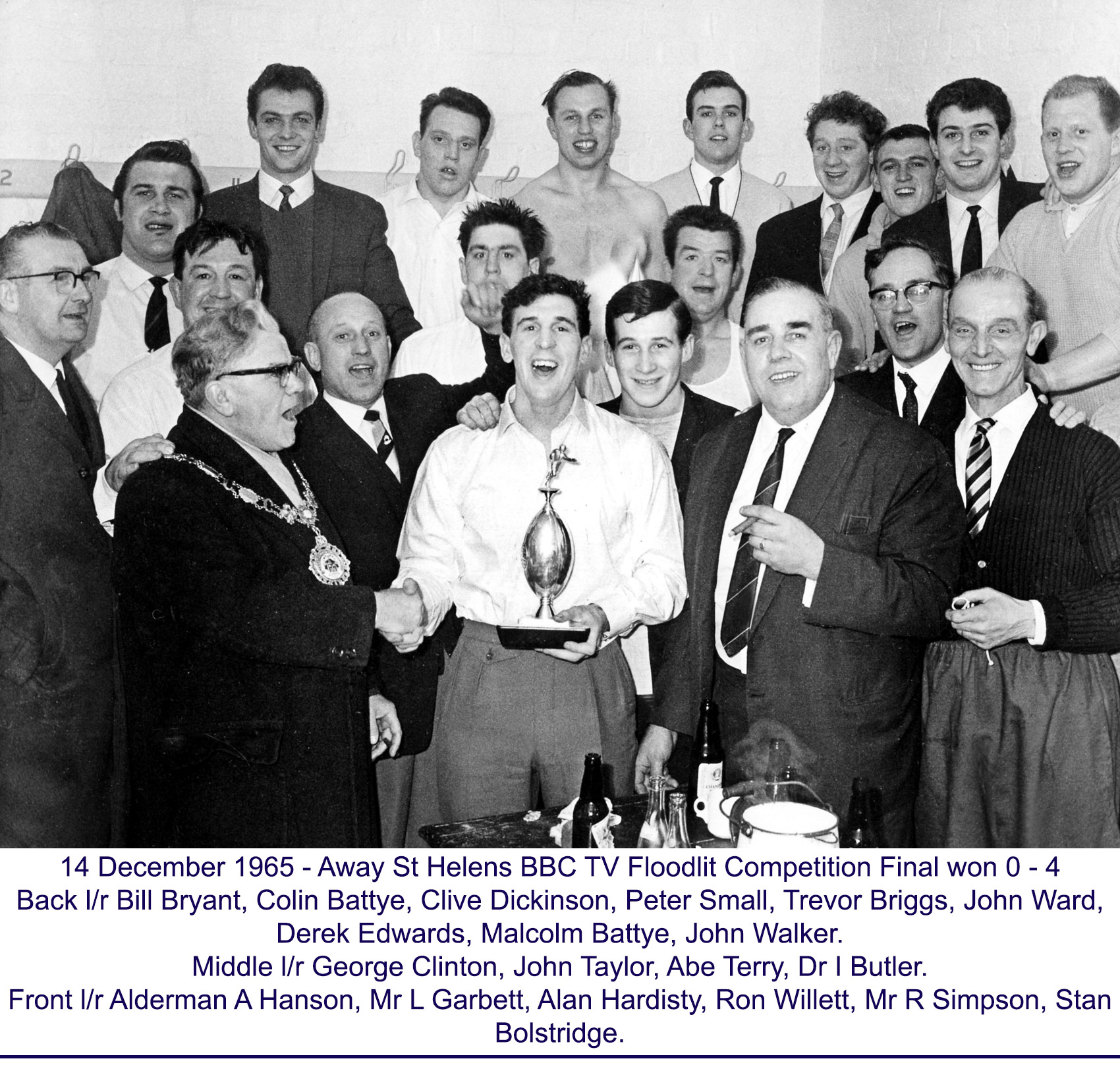 In 1964 the BBC launched its second television channel. A year later, the Corporation was looking to fill a midweek slot with a rugby league tournament. The new competition became known as The BBC2 Floodlit Trophy. One game from each round was played on a Tuesday night and the second half was broadcast live on BBC2. It ran during the early months of the 1965-66 season and eight teams took part. Leigh, Oldham, St. Helens, Swinton, Warrington and Widnes already had floodlighting. Leeds installed theirs the following season. Fortunately, for Castleford, they had just installed floodlights earlier that year so were able to take part in a competition that proved to be very successful for the club. Over the course of the next 14 years Castleford went on to win the trophy 4 times.

The competition was played in the form of a mini-league with the semi-finals and final stages being on a knock out basis. On Tuesday 26th October 1965, Cas entertained Leeds in their first Qualifying Round, which ended 7-7. In the second Qualifying Round Cas beat Oldham, which left them fourth in the mini-league table with a points difference of +2 from their two games. The rules stated that the four clubs with the greatest total winning margins were to qualify, and proceed, to the semi-final. The four clubs in this case were Widnes, St Helens, Swinton and Castleford. Widnes, who finished top of the mini-league, entertained Castleford but were beaten 9-12. In the other semi-final St. Helens beat Swinton. The final was not played on neutral ground, so on Tuesday 14th December, Cas had to travel to Knowsley Road. A formidable St. Helens line-up included such great payers as Tom van Vollenhoven, Len Killeen, Alex Murphy, Cliff Watson, John Mantle and Doug Laughton. Cas, however, were not short of their stars, with Derek Edwards at full-back, Alan Hardisty and Roger Millward at half-back and Johnny Ward, Clive Dickenson, Bill Bryant and Peter Small amongst the forwards. With defences definitely on top, Castleford came out victors, defeating St. Helens by 4 points to nil (two goals by Ron Willett). 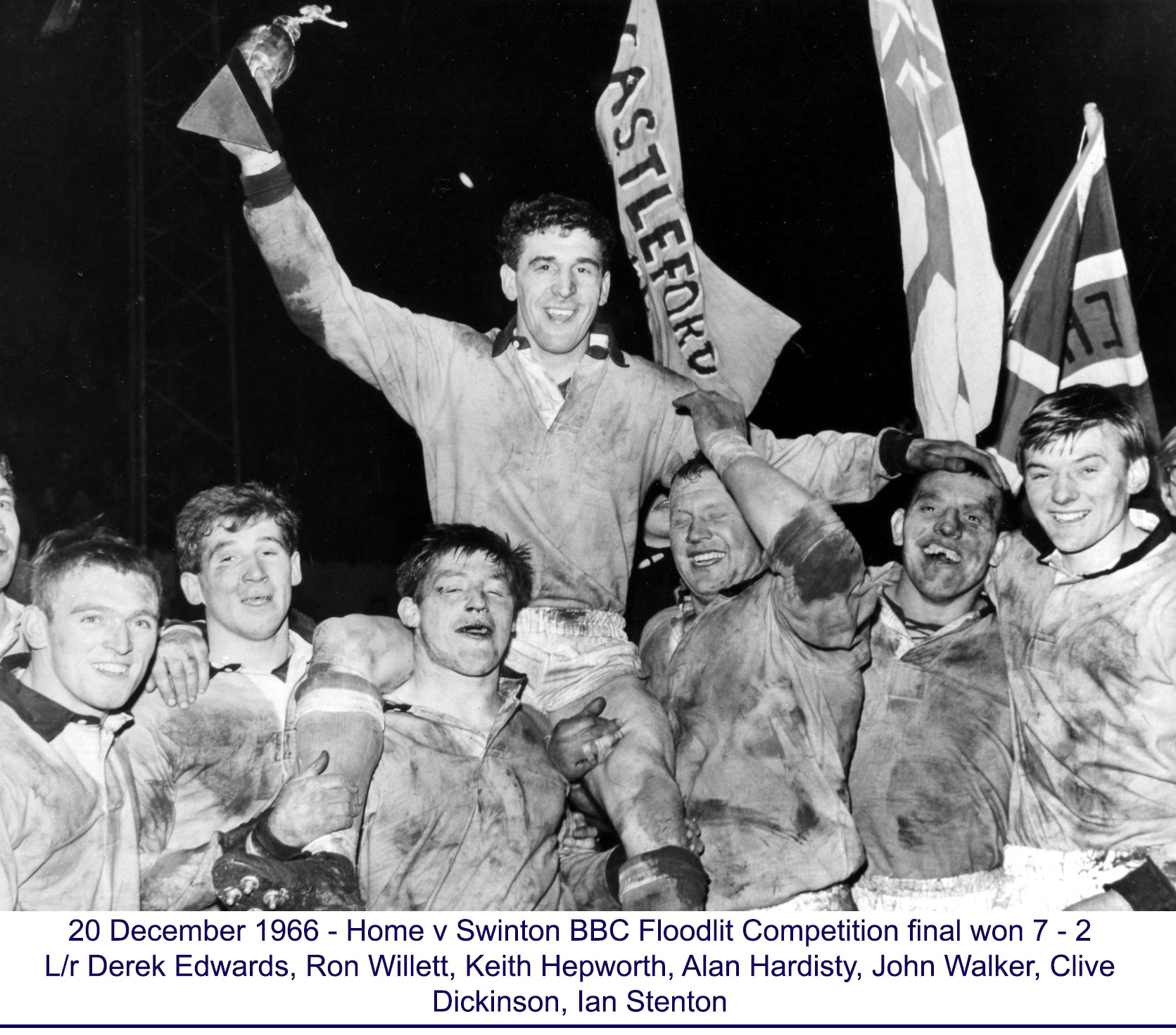 Seeing the attraction of the new tournament, twenty-one clubs went on to install floodlights for subsequent competitions. In October of the next season an experimental four tackle rule was trialled. By December the rule was introduced across all competitions.

So many teams were now taking part that, in the 1966-67 season, a Preliminary Round was introduced. Played over two legs, Castleford were drawn against Leigh, winning the first leg, away, on Monday 15th August 16-11. They then ran away with the return leg 39-18; Alan Hardisty (playing his first game of the season, following a stint down-under) scored four tries, which proved to be the difference in the two teams. In the 1st Qualifying Round, Cas were once again drawn against Leeds, only this year, the game was played at Headingley, on Tuesday 11th October. The match was, again, tied but Castleford, after beating Warrington 31-10 in the second Qualifying Round secured top spot in the mini-league table. Barrow came to Castleford in the semi-final but were no match for 'the Lads' as Cas ran out winners 21-5. So, on Tuesday 20th December, Cas were at home to Swinton, in the final. A Jack Austin try, a goal from Ron Willet and a (2 point) drop-goal from Keith Hepworth secured the victory, 7-2.

The following season (1967-68), Cas made it a hat-trick of wins with an 8-5 victory over Leigh in the final. For the first time, the final was played on a neutral ground, with Headingley being the chosen venue. This year the competition was a straight knock-out. On the way to the final, Cas entertained Keighley in Round 1, winning 18-7. In Round 2, yet again, they played Leeds, this time at Wheldon Road, winning 12-9.Two weeks later Warrington came to town in the semi-final, where the scoreline was 14-2 in favour of Cas. And so, onto the final which took place on Tuesday 16th January. Alex Murphy was now at half-back for Leigh and Laurie Gilfedder at loose-forward but Cas were becoming a daunting prospect for most team, with Derek Edwards at full-back, Alan Hardisty and Keith Hepworth at half-back, Dennis Hartley, Johnny Ward and Dougie Walton in the front-row, Bill Bryant and Mick Redfearn in the second-row and Malcolm Reilly at loose-forward. Whilst Leigh scored the only try, Cas won by virtue of 4 goals from Ron Willett. 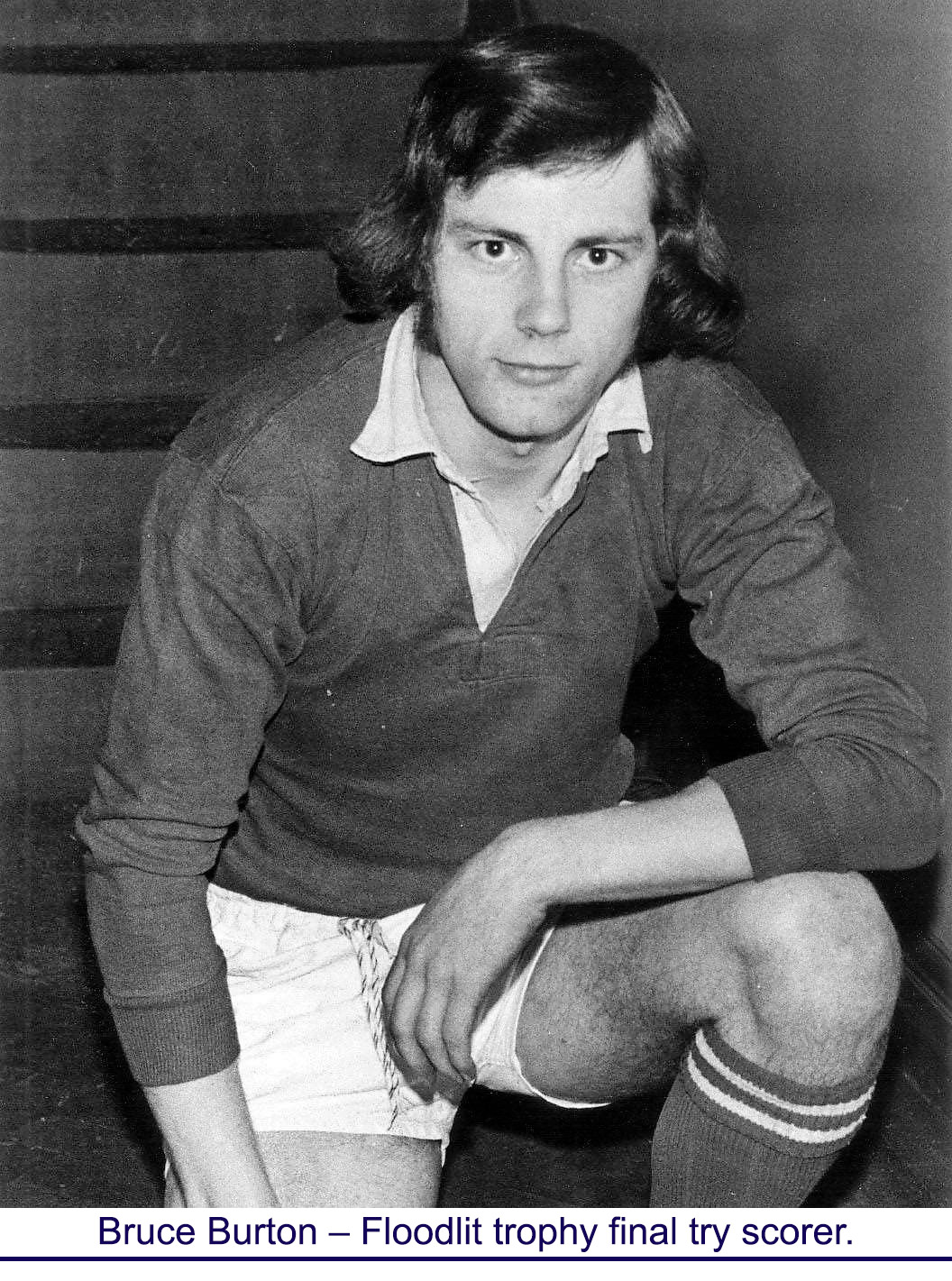 In terms of the Floodlit Trophy, a number of lean years followed, as Cas were eliminated from the competition in early rounds. However, the competition was now in its 12th year and on Tuesday 14th December 1976, Castleford took the trophy for a fourth time winning, at a very foggy Hilton Park, in a repeat of the 1967 final, beating Leigh 12-4. Malcolm Reilly was the player-coach at Cas by this time and, even though Steve 'Knocker' Norton was sent off early in the game, Cas were too good for the home side, scoring two tries to none. Bruce Burton, who was also the star in many of the previous rounds, scored one of the tries. Jamie Walsh scored the other and Geoff 'Sammy' Lloyd kicked 3 goals. The Cas team had changed considerably since they last lifted the trophy but with the likes of Geoff Wraith, John Joyner and Gary Stephens in the line-up, Cas were still a difficult side to beat. In Round 1 Cas played Hull Kingston Rovers 'Down The Lane' coming out on the right side of a 16-8 scoreline (Bruce Burton scoring one of the tries). Cas seemed destined to play Leeds at some stage on the competition. Inevitably they were drawn together in Round 2! Cas came away from Headingley with a comfortable 17-2 victory (Bruce Burton scoring all 3 of Castleford's tries). A difficult semi-final tie at The Boulevard saw Cas defeat Hull 15-8 and Burton again got his name on the scoresheet with a try.

Two years later, a combination of funding cuts and a feeling that there were just too many cup competitions, lead to the cancellation of the BBC2 Floodlit Trophy. Castleford, however, can look back on a competition which they won more times than any other team.

Researched and written by Tim Anderson